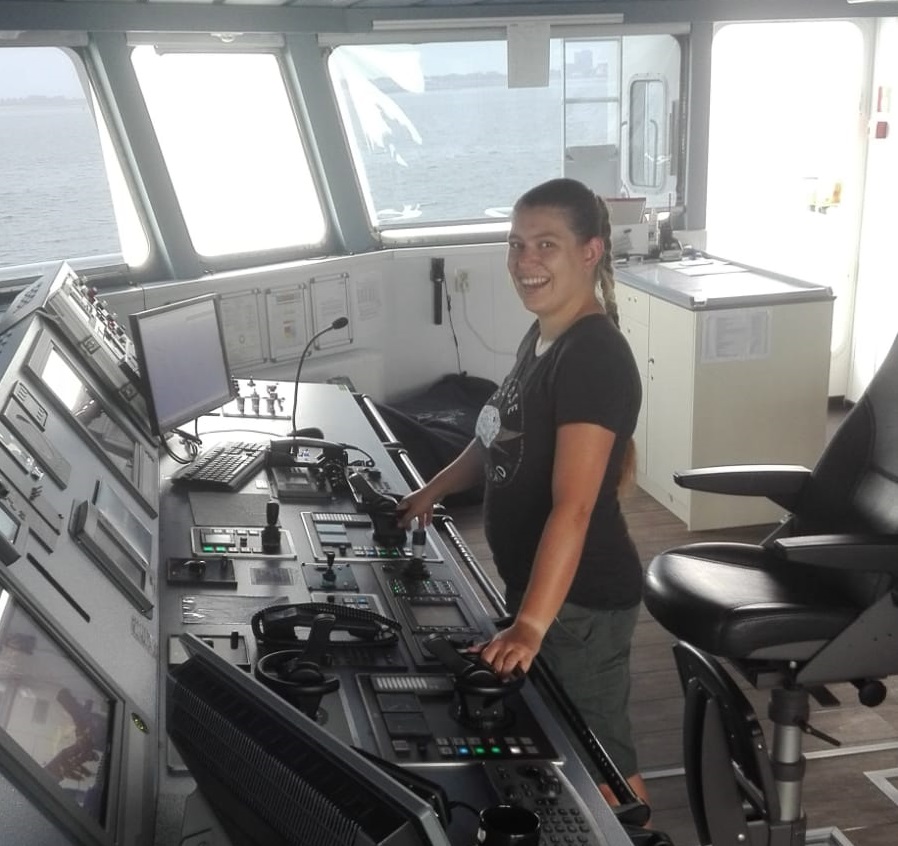 As long as I can remember I wanted to be on a ship.

What is your job title?

Can you explain what you do and what a day in a life at sea looks like?

As a second mate I’m responsible for the navigational equipment on board, like: making the voyage plans, do weekly updates, and the testing of equipment at a daily basis to make sure it works properly. If it’s my watch than I’m responsible of navigating the vessel according the voyage plan, which also includes reporting to the coast stations of the region we’re in at that time. If we’re doing a job on DP (Dynamic Positioning), we‘re always with at least two people on the bridge. To ensure you maintain focused, you get relieved every hour as you’re working behind the DP console. A normal day on board consist of twelve hours of work, doesn’t matter which day of the week it is. My shift either starts at 6 a.m. or at 6 p.m. for twelve hours. When we’re undertaking DP operations, we have two second mates on board. One of us will do the dayshift, the other one will take the night shift. The first officer and chief officer also do twelve hour shifts, but start at midday or midnight. Before I go to the bridge I make sure I’m fully awake and also have some breakfast before I start working. When I’m at the bridge, the first hour in the DP chair is mine to start with and then it goes one hour on, one hour off. The hours you’re not in the DP chair, you’ll use for updating the ECDIS and other navigational publications on board, some administration work  and cleaning the bridge is also part of the job. When we’re on standby, the captain will keep an eye on the bridge so we can do some jobs on deck like maintenance, safety related jobs or do a drill. After twelve hours of work, I’m happy I enjoy reading my books while putting some music on, or sit around with part of the crew in the dayroom. Here we watch a movie together or sing some karaoke, as you might guess there is always something to do around the vessel.

Which qualities does it take to be a successful 2nd mate?

You must be versatile and adapt yourself to all kinds of different situations. Being curious by nature can be really beneficial too, because you always want to learn new things and dig deeper when confronted with new challenges.

What do you enjoy most about your work, what has been the highlight so far?

I really enjoy being at sea. It’s such a beautiful workplace and it never bores you. One highlight is really hard to say, I have at least a few. Like the first time I saw whales, or dolphins, or sea turtles in real life, it’s beautiful to see them. Or the day one of the clients on board video called home and showed his daughter the bridge. She saw me and shouted: “Dad, you’re working with a girl on board, so cool, that’s what I want to do when I grow up!”.

What are the biggest challenges in your job?

Not taking anything for granted, be ready for changes and keep your focus at all time. Just like the weather, you can use the best probability models to predict the weather, but when it starts to rain and good weather was predicted, you have the be ready for the worst.

Why did you choose a career in the Maritime Sector?

As long as can remember I wanted to be on a ship. I started sailing when I was seven or eight years old. At first they were small sailing boats which grew into bigger sailing boats when I got older. During secondary school I decided I wanted to be a captain one day, so I went to the Antwerp Maritime Academy after I graduated secondary school. It took me five years to graduate with a master’s degree and after that another year to finally find my first real job as a seafarer. When I followed the maritime academy I did various internships during the holidays and also volunteered to coach the first year students during their one month trip on board a tall ship, but I didn’t have enough experience to start a job. After one year of mailing, calling, visiting different events and a lot of perseverance, I found a job as an apprentice in the offshore sector by a big company. I sailed with them for almost two years as an apprentice and as a third mate. As I was looking for a new job, in the meantime I went again on the tall ship, this time as a teacher, to help the first year students of the Antwerp Maritime Academy. After a few months, one of my friends showed me the advertisement of SeaMar in which they were looking for a new second mate, I decided to take this opportunity, went all the way to the north of The Netherlands for an application interview and at my birthday I got the amazing news that I got the job!

Today women represent only 2% of the world’s 1.2 million seafarers, various programs and initiatives are held for gender equality and for interesting women to join the maritime sector. Why is the shipping industry a great career for women to consider?

It’s a really versatile industry. You have so much different opportunities, like being part of the crew on a tanker or travel the world on a big cruise vessel. Your office has a different view every day, you work with different nationalities and learn from them. Being part of an industry that always keeps growing and shows you a lot of the world, is just awesome. 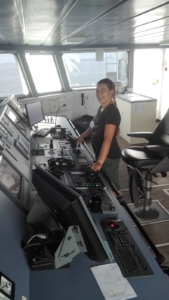